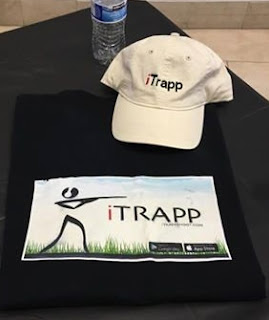 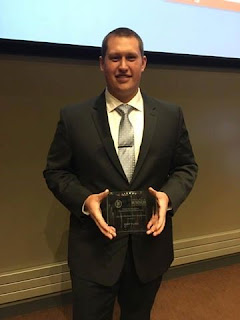 His business plan and presentation was for iTrapp, a first-of-its-kind mobile app for scoring trap shooting meets.

The competition was judged by a a panel of local Omaha Business "Sharks".  As the winner, Taylor was awarded a $3000 prize.

On Friday, 4/22 the music department traveled to Blair High School to compete in District Music Contests.  All groups and soloists performed well, and received the following scores:
An MP3 file of the band &choir is available on the student shared drive:  in a folder titled: 1 District Music.

The Mount Michael journalism team walked away with numerous medals around their neck on Monday April 25.  The team place fourth over-all out of 25 teams competing. Students competed in two sessions of write off/design for most of the morning at Northeast Community College in Norfolk NE.  16 students from Mount Michael competed. Photos from Ms Fosco

Mount Michael Sophomore Jimmy Severa, has been awarded a $20,000 scholarship through the H&R Block Budget Challenge a free, interactive, real-life simulation personal financial education program that rewards students for mastering real-world budgeting and personal finance decision-making. Jimmy Severa is 1 of 66 winners nationwide he place 2nd nationally in the simulation in which he partook.

Now in its second year, the H&R Block Budget Challenge works by replicating an adult’s financial life, requiring students to pay virtual bills, save for retirement and repay student loans, all from the safety of a classroom. Students from across the nation who participate in this virtual program compete for $3 million in college scholarships and classroom grants.

Mount Michael is very proud of Jimmy for being among the top performers in the country in the H&R Block Budget Challenge. Financial management skills are so crucial — especially for teens who are entering the ‘real world. We’re thankful for resources like the H&R Block Budget Challenge that help teach students to take control of their financial future.

This school year nearly 155,000 students are participating in the program, bringing the two-year participant total to almost 250,000 high school students from all 50 states. By the end of May, H&R Block will have awarded more than $6 million in grants and scholarships through the H&R Block Budget Challenge program.

Jimmy is the son of Drs. James and Julie Otten Severa of Omaha and attended St. Cecilia and St. Pius/St. Leo for grade school and junior high. Jimmy's Economics teacher is Holly Toft. 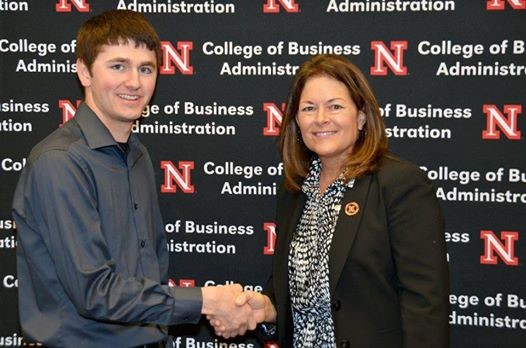 At the CBA Honors Ceremony, on Sunday April 24, Justin Lytle '14 received a high scholar award and a gold key for being in the top 2% of the College of Business class at the University of Nebraska.

At the 2016 University of Nebraska Omaha Chemistry Field Day Mount Michael's chemistry teams came away with 1st place in the Advanced Division, 1st & 2nd place in the Primary Division, and a four team were the winners of the "Equation Balancing Act" event.

Some of the other schools at the competition were Millard North, Millard West, Millard South, Duchesne, Blair, Northwest High School, and Skutt Catholic.

On Sunday April 17, 2016 Bro. Roger Mangels, OSB professed his Solemn Vows as a monk of Mount Michael Abbey.  For much of his life he worked as an actor before he felt the call to religious life.  He spent several years at Blue Cloud Abbey learning about monastic life.  Blue Cloud closed a few years ago which brought Bro Roger to us.  He currently works with the students in drama, serves as sacristan, helps in the school library and tends to the prayer garden.  More Photos

Email ThisBlogThis!Share to TwitterShare to FacebookShare to Pinterest
Labels: Abbey 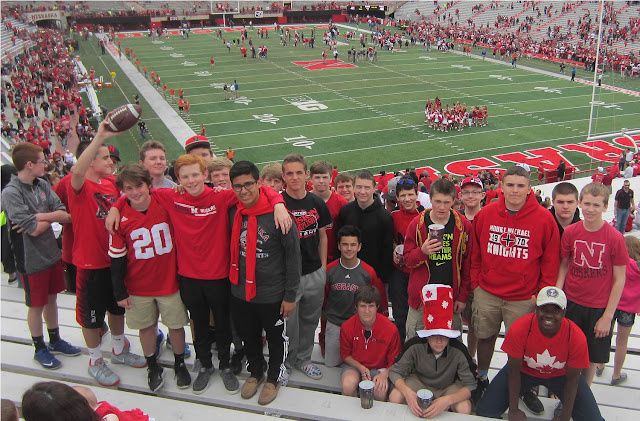 Chinese national Tony Gao is a junior at USC, and he’s been studying in the United States ever since his days in junior high. He’s experienced the myriad challenges of studying in a foreign country and he’s overcome them. In one particular problem he faced, Gao saw an opportunity, and, with the help of two business partners, he seized it.
When Chinese students make their tuition payments, it can take more than a week for a payment to navigate from a Chinese bank to an American Bank, and then to a school or university.
With that in mind, Gao has made it his business to try and give Chinese students a faster, easier and more cost-effective way to pay their tuition. In 2013, he co-founded Easy Transfer Limited, a company that enables Chinese students and their families to make tuition payments directly from Chinese bank accounts to U.S. universities. The other co-founders are University of Nebraska-Lincoln student Michael Shang, whom Gao met while attending high school in Lincoln, Nebraska, and Randy Bretz, a long-time business leader who mentored the two young men.
Now, students from 517 different high schools and colleges across the U.S., including USC, have already used the payment service, Gao wrote in an e-mail to OIS.
“I know how hard it is for international students to pay their tuition, and so I really want to do that, to help them,” Gao said in an interview at the student dining area outside of USC’s Tutor Campus Center.
Using Easy Transfer, students can make tuition payments in just a few minutes, and schools or universities can receive the funds within 48 hours, Gao said.
In 2015, at 21 years of age, Gao was rewarded for his vision and hard work when he became the youngest person to make Bloomberg Business Week’s list of 25 pioneer entrepreneurs from China under the age of 25.
Gao’s a strong proponent of entrepreneurship, encouraging all of his friends who have business ideas to jump right in and pursue them while they’re still young—just as Gao pursued his idea. Some ideas cannot wait, Gao said, citing a popular belief in the Silicon Valley tech industry.
But when it comes to any person whose primary goal is to make money, Gao doesn’t prescribe entrepreneurship.
“If your goal is to make people’s lives better, you really get the soul of being an entrepreneur,” he said.
Before he considered entrepreneurship, Gao thought about working in a large financial services corporation. At the age of 19, he put on a suit and started shadowing a group leader at Ernst and Young, an international business management consulting firm, in its Bejing office. But he didn’t find much joy in the uber-competitive environment there, and he left Ernst and Young after just a month. Entrepreneurship, he has found, suits him best.
Holden Slattery, Communications Editor for OIS, is a Master of Public Administration candidate. He is from Philadelphia, Pennsylvania.

On Tuesday April 12, 2016 the school day routine paused to celebrate the induction of new members into the the Fr. Edward Malone Chapter of the National Honor Society.  At the swearing of the oath the new members promised to uphold the societies four virtues of Character, Scholarship, Leadership and Service. More Photos

The new members are as follows:

Video
(It's a Wonderful Knight Life:
How Does a Knight Earn His Wings? by Tom Elkins)

This year's Night of Knights was It's A Wonderful Knight Life. The event filled tables with 620 guests. Honorees for the evening were alumni Chicago Archbishop Blase Cupich and Tom Hastings.

A special feature was a video produced by notable film editor Tom Elkins who is a good friend of Abbot Michael Liebl OSB.  It is well worth taking a few minutes to watch.

Thank you to everyone who attended and worked the event.

Mount Michael's journalism team came away with the top award (Sweepstakes) in class B  at the University of Nebraska Omaha High School Competition.


The Mount Michael Track team is has been reaping numerous pieces of hardware in competition this spring. 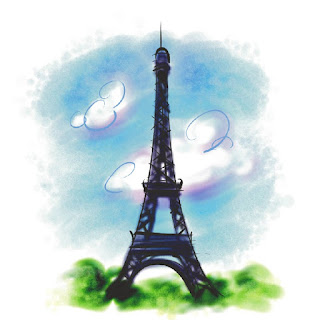 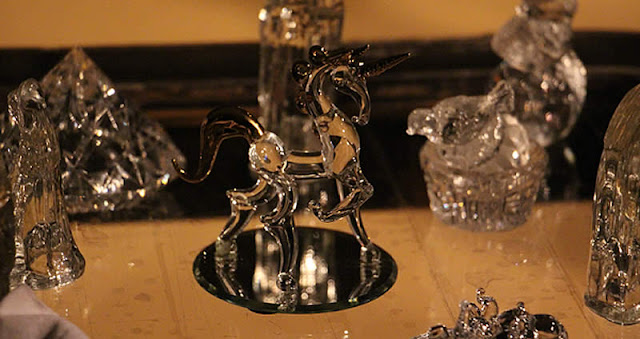 The Glass Menagerie is a four-character play by Tennessee Williams that premiered in 1944 and catapulted Williams from obscurity to fame. The play has strong autobiographical elements, featuring characters based on Williams himself, his histrionic mother, and his mentally fragile sister Laura. 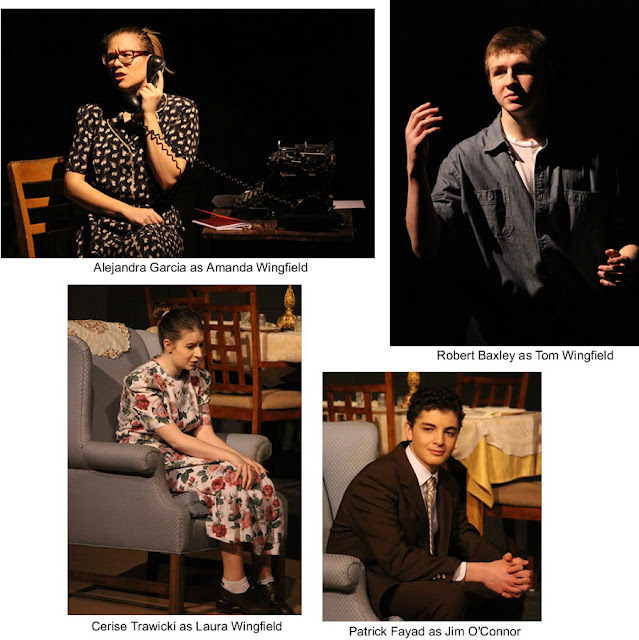 Amanda Wingfield
A faded Southern belle, abandoned by her husband, who is trying to raise her two children under harsh financial conditions. Amanda yearns for the comforts from her youth and also longs for her children to have the same comforts, but her devotion to them has made her – as she admits at one point – almost "hateful" towards them.
Tom Wingfield
Amanda's son, and younger brother to sister, Laura. Tom works at a shoe warehouse to support his family but is frustrated by his job and aspires to be a poet. He struggles to write for he is sleep-deprived and annoyed. Yet, he escapes from reality through nightly excursions, apparently to the movies but also to local bars. Tom feels both obligated toward yet burdened by his family and longs to escape.
Laura Wingfield
Amanda's daughter and Tom's older sister. A childhood illness has left her with a limp, and she has a mental fragility and an inferiority complex that have isolated her from the outside world. She has created a world of her own symbolized by her collection of glass figurines.
Jim O'Connor
An old high-school acquaintance of Tom and Laura. Jim was a popular athlete and actor during his days at Soldan High School. Subsequent years have been less kind to Jim, however, and by the time of the play's action he is working as a shipping clerk at the same shoe warehouse as Tom. His hope to shine again is conveyed by his study of public speaking and ideas of self-improvement.                                                             All text is taken from Wikipedia
Stage Manager - Thomas Weeklly
Technical Director - J. P. Jensen
Drama Sponosors: Br. Roger Mangels, OSB & Noelle Kunkel