The Mount Michael Knights had an award winning day at the 25th annual UNL Math Day.  On the PROBE I (Problems Requiring Original and Brilliant Effort), for the first time in school history, Mount Michael took first  place out of all 105 schools participating.  This also marks the 9th time the Knights placed first in their division in the last 11 years and they placed second the other two years.  The Knights had 12 individuals place in the top 50 out of 1506 participants. 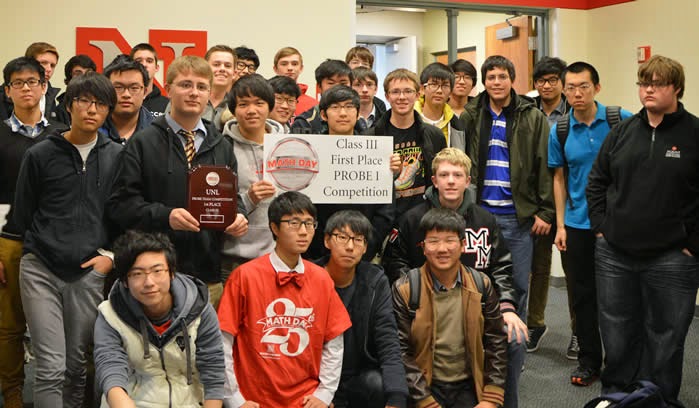 Probe II
The top 40 students from the PROBE I competition are invited to participate in the PROBE II competition. Jae Jun Park placed 9th, earning him a $2000 scholarship.

Complete results for the UNL Math Day can be found on the event's website.

Listed below are the Knights that participated in the UNL Math Day. 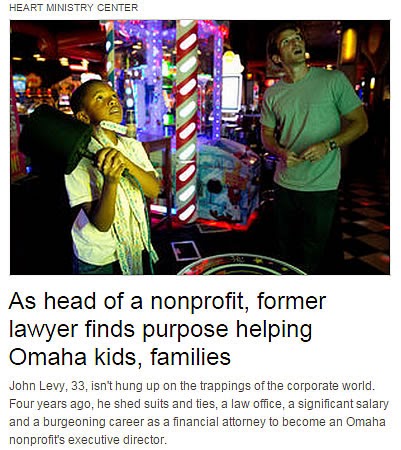 The rumors have been heard before: “This is the year our terrible Internet is fixed.” However, this rumor is one that is finally coming true.

Right now the school is in the middle of installing a new wireless system and raising money to increase bandwidth.

The system change is a combination of two separate but similar plans. The first plan, which is fully underway, is a new Wi-Fi system. This will establish a more secure connection to the Internet in the building and allow a greater number of devices to be connected.

The second plan involves bringing a fiber optic cable directly to the school. This will increase Internet speed dramatically. For this part of the plan, a sum of $100,000 must be raised according to the development office.

The new WiFi system, called Meraki, a product of Cisco, will have 16 access points, and will provide a more reliable connection with broader coverage and is cloud hosted, instead of the 10 access points that the current Ruckus system  provides using a controller.

There will be three levels of access points. The higher the number, the more devices it can handle. An area of the school which sees higher amounts of traffic will receive a more powerful access point. If there are not enough to fulfill the needs of the school, more can be ordered.

This also means that a greater number of devices can be connected. “I am going to be a lot more willing to connect devices like iPods to the new system,” said Dave Cormier who coordinates technology at Mount Michael.

Currently, Infinet, an I.T. consulting firm that the school uses to support technology on campus, is working on setting security parameters on the system.

When this step is finished, the system will be beta tested by a small number of faculty and students. Cormier hopes this will weed out any issues, before it is implemented across the school. 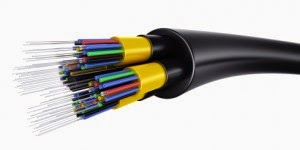 The fiber optic cable, which hinges on the community raising a sum of $100,000 dollars, has not been purchased yet.However, according to Kim Volpone, director of development, the giving challenge has reached 41 percent of its goal.

The giving challenge gained momentum when alumnus Zach Nelson (‘79) and his wife Elizabeth Nelson donated $100,000 and challenged others to donate to match that amount for the fiber optic cable.

Money from this giving challenge will also go towards resurfacing the track that surrounds the Nate LaFave Memorial Field. “Construction is expected to begin early this spring on the resurfacing,” Volpone said.

Email ThisBlogThis!Share to TwitterShare to FacebookShare to Pinterest
Labels: Miscellaneous, The Mount 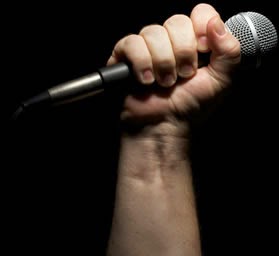 For the youth of today, poetry can seem irrelevant and inaccessible. For many slam-poetry aficionados though, nothing could be further from the truth. “Writing [poetry] helped me see the world around me more clearly and made my life better because of that,” said Matt Mason, director of the Nebraska Writers Collective. “[...] I came to find poets who I loved and who taught me a lot about what poetry really can be.”

An informal form of poetry, Slam has its origins in Beat and Negritude poetry forms, commonly with a stylized nod to Hip-Hop. It caught on in urban areas throughout the nineties. “Slam poetry is really beautiful word vomit,” Jarrett Crnkovich (‘14) said, who competed and participated in slam poetry while at Mount Michael.

“Slams” events which allow youth to gather for the purpose of slam poetry, allow aspiring poets to meet other teens they might not cross paths with regularly.

Transcending the boundaries of strong socioeconomic differences is for many, quite a learning experience. This is also a common motif through highly political pieces, which provide not only an outlet for creative minds, but a voice for those not typically given the microphone.

For students at Mount Michael, the opportunity to try out Slam Poetry will be available this year. In coalition with the Nebraska Writers Collective, students at the Mount will prepare by writing and practicing poetry in hopes of competing at the Louder than a Bomb festival in March.

Despite her already full schedule, Fosco feels a commitment because she also was involved with Omaha Poetry scene from 2004 to 2006. She was often an audience at poetry nights until she eventually tried her hand at writing poetry.

After nine months, she built up the courage to perform her poetry, largely due to her experiences as an audience member. “To me, it was like a spiritual [connection],” Fosco said. “The only other time I felt like that was in church.”

Slam Poetry at Mount Michael has only been available for four years, the same time that Louder than a Bomb has been in Omaha. The original festival started in Chicago in 2001. Bringing Louder than a Bomb was a interest for Mason as director of the Nebraska Writer’s Collective.

“The documentary Louder Than a Bomb played in Omaha in late summer of 2011 and stirred up interest,” said Mason. The Louder than a Bomb program is funded from donations a few organizations.” Since then, it’s grown to 32 teams.”

A big part of funding comes from individual donors, as well as an optional entry fee from schools. This is kept optional because Mason’s goal is to have Louder than a Bomb available for everyone to participate, particularly those normally unable to.

“Nebraska is a great place for poetry as there is an amazing amount of talent here and more opportunities for writers every year,” Mason said. Ted Kooser, a Nebraskan poet chosen as Poet Laureate, is just one example of the talent found in Nebraska. Mason himself writes poetry. One collection “Things We Don’t Know We Don’t Know” won the Nebraska Book Award for Poetry.

Bringing the opportunity for teens to share and celebrate poetry can have a long-lasting effect. “It has made me a much more creative person,” Crnkovich said.” It has made me more accepting and more open minded as well as more vocal about social issues, also slightly more cynical.”

Crnkovich’s advice for aspiring poets: “Write nonstop and don’t care of you suck at first,” Crnkovich said. “...everyone does. I did, Andy Johannes did, Tae Sung didn’t though, he was just slightly less perfect,”

Email ThisBlogThis!Share to TwitterShare to FacebookShare to Pinterest
Labels: Arts, The Mount

Engel Displays His Love for Hunting

Joe Budd | Staff Writer for The Mount
When Garrett Engel was 11 years old he shot his first deer. “It was getting dark and I heard footsteps behind me. Then I saw a little buck.” After Engel successfully took his shot, his first thought was to find his dad. “I think he was more excited than I was. The whole family was so proud of me.” At this very moment,the long and prosperous hunting career of sophomore Garrett Engel had officially begun.

Hunting is a sport of precision, accuracy and strategy. According to Engel, patience is also key. A hunter may not even see an animal worth shooting for a couple of days. “The most difficult aspect of hunting for me is patience, but I always work through it and see wildlife.” Engel says that being around wildlife is his favorite aspect of hunting. He enjoys the company of squirrels and birds when deer are not present. “There’s always a show to watch.” Although he did not carry a gun until he was 11 years old, Engel did walk along with his father while he went hunting. It was on these walks that Engel became inspired and amazed by the natural world.

The hunting season for deer is typically Sept. 1 to Dec. 31 while the turkey season is March 25 to May 31. “Those two seasons really keep me occupied.” Engel says that he traps raccoons, red foxes, and coyotes, selling their fur to make income for the winter.” I usually make around $500.” Engel also says that he hunts for deer because he enjoys processing his prize for food.


The typical hunter uses a gun in order to hunt, but Engel is not the typical hunter. Instead Engel hunts with a bow and arrow. In order to successfully hunt deer using a bow, the animal being hunted needs to get closer to the hunter. This makes bow hunting significantly more challenging than traditional gun hunting because this gives the deer a much better opportunity to smell and see the hunter. Nonetheless, Engel is in love with the sport. “Bow hunting is the greatest thing ever, nothing gets your blood pumping more than hearing the footsteps of deer coming your way.” says Engel. “It’s what drives me through the week because I know that on the weekends I have the chance of getting my next trophy.”

Hunting with other people is a routine habit for the average sportsman, but not for Engel. “Usually I hunt by myself because there is less smell and less for the deer to see.” However, Engel has hunted before with a few classmates. When asked about his hunting experiences with Engel, junior Colton Starman immediately smiled and said “Hunting with Garrett is so much fun.”

Most hunters ask their parents or friends for hunting advice. However, as previously mentioned, Engel is not like most hunters. Instead he uses Instagram to communicate to other hunters across the United States. “I learn a lot from the other people that I follow. They post tactics and then I ask them questions about these tactics which really helps me improve my game plans and strategies.”

Engel says that deer are his favorite animals to hunt. “Whenever a deer comes within 20 yards, your heart and blood start pumping even if you aren't going to shoot it.” Deer are the most hunted animals in the state of Nebraska but Engel ultimately seeks another prize.

“My dream hunt is a red stag from New Zealand, they are just the coolest looking animals.” Engel said.