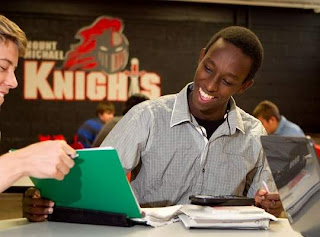 Email ThisBlogThis!Share to TwitterShare to FacebookShare to Pinterest
Labels: Students

The Mount Michael Benedictine School Class of 2012 is the largest graduating class in the school’s history.  The class is composed of 58 young men, exceeding the previous high of 46 of last year’s class. The average  ACT score for this class  is 28 (27.7). The average ACT score over the last 5 years is 28 (27.9).

Students who  were awarded some kind of scholarship totaled 76% of the students and 66% have accepted scholarships to the college they plan to attend in the fall.

At the State Trapshooting Meet held in Doniphan, Nebraska Lumir Drahota won 2nd place as an individual at the 24-25 yard range. 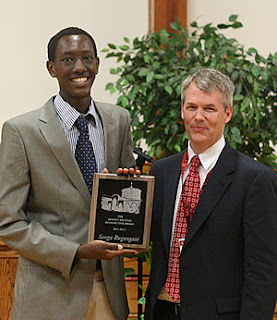 Other notable awards announced at the ceremony were Thomas Feichtinger with the Key Staffer award for Journalism, Rowan Gruber and Scott Townsend with the Hugh O’Brien Youth Leadership Award, Andy Johannes with the Exchange Club Sophomore of the Year award, Joe Kucirek for Boy’s State, and the Saint Benedict Award for Ministry to Sean Kruger and Lucas Buehler.