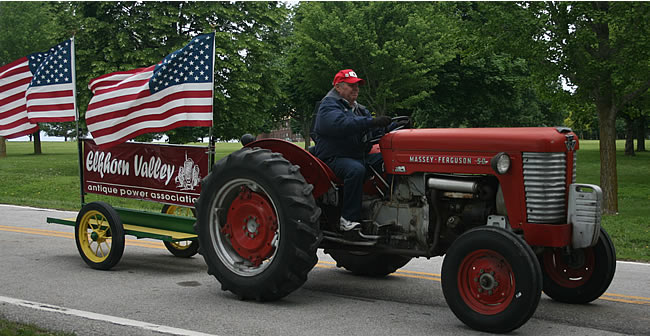 Mount Michael served as the start and terminus of the annual Elkhorn Valley Antique Tractor Club’s ride for charity.  The event raises money for the Christian Outreach Program of Elkhorn.  The ride began shortly before 11:00 am and proceeded down to Maple Street and then through old town Elkhorn then down the Old Lincoln Highway which is celebrating its centennial.


The tractor parade then wound its way back to Mount Michael for a club picnic at the Mount Michael Michaeleen picnic grounds.   Bro Mark (John) Berns a monk and member of the club served as host.  More Photos

During summer vacation some kids are so consumed by video games and cell phones that they often forget that the purpose of summer is to be outside. Since 1967, Camp Mount Michael has offered activities such as archery, outdoor camping, hiking, and arts and crafts for boys ages 7 to 14.

This year Mount Michael will be welcoming back 2003 alumni Paul Hotovy. Hotovy is a teacher at Pensacola Catholic High School in Florida. He has four brothers, including Alex Hotovy, a current Mount Michael sophomore. Paul has also been a camp counselor at the camp for several years. “I am extremely enthusiastic about camp. When I was a counselor, I told Mr. Crawford that I would do camp for free. He still paid me, but I meant it,” Hotovy said. Admissions director Eric Crawford is just as enthusiastic about Hotovy, “Paul is a great pick up for the program.”

Often, new directors change programs to try and make them better, but Hotovy feels the program is strong already “I have fond memories of camp, but I really think that camp is much better now. There have been a lot of good ideas and changes in the last five years.” One big change was switching the name from Camp Saint John to Camp Mount Michael. “This was for marketing and consistency purposes,” Crawford said. The camp is one of Mount Michael’s biggest recruiting tools. In fact, 43% of all students currently enrolled at Mount Michael attended camp for at least one year.

In any case, Hotovy doesn’t plan to change much during his first summer as director. “Camp has an awesome tradition. The Camp Mount Michael formula is great, so I see no need to tinker with it too much. We’ll still go to the pool, do archery, horseback riding, and have Olympic day. I do not plan on doing anything radically different.” Hotovy did however; say that some minor things would change such as the camp tee-shirts having the traditional sun logo again.

Hotovy looks forward to his duties as camp director this summer. “As people get older, they get a little more cynical and pessimistic. Being with 7-14 year-olds is rejuvenating. They have so much life and are always excited about everything. It’s really a breath of fresh air to be back at camp” Hotovy said.