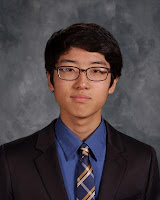 David Choi '15 earned one of only 60 scholarships  available to seniors who took the National Spanish Exam. The scholarship competition was based on the exam, a video clip in which he explained in Spanish how he planned to use Spanish in the future and a persuasive essay written in Spanish. 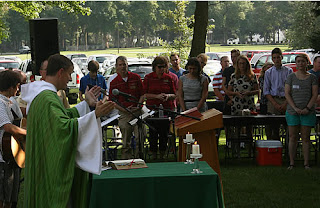 The new school year kicked off with the annual Mass and picnic. The crowd was estimated at  800 people consisting of  family members, faculty and staff.   This year’s opening enrollment is 242 students with representatives from 10 different states, 10 different countries and 5 continents.

For Benedictine Brother August Schaefer and Apostolic Oblate Jessi Kary, family is found in the homes where they grew up, and inside the religious communities where they live.
During this Year of Consecrated Life, which Pope Francis opened in late November and will close Feb. 2, 2016, the two reflected on the importance family played in their vocations, and their happiness as members of religious orders.
Both Brother Schaefer and Kary grew up in South Dakota, and settled into religious life in communities in the Archdiocese of Omaha.
Brother Schaefer, 42, said growing up with his parents, Michael and Patricia, and his three siblings, working and praying together on a farm north of Sioux Falls, S.D., made life at Mount Michael Benedictine Abbey near Elkhorn immediately comfortable and natural.
"Especially in my ending up in a Benedictine community, with its strong emphasis on family life, praying, eating and working together," he said. "Growing up on a farm we had common tasks of caring for the animals, prayer and church. We did that together."
Brother Schaefer said his parent’s involvement in their parish, Cathedral of St. Joseph, also was important, as he watched them help cook roast beef with all the trimmings as part of an annual parish fundraiser. And in support of the faith community, they also gave away eggs from the farm once a week to the Dominican Sisters at a nearby convent.
His parents taught their children the importance of attending Mass as a family, and taught them how to pray the rosary and prepare for their first Communion and confirmation.
And his parents responded with openness and support when he felt called as a young adult living in California to a vocation as a consecrated religious, Brother Schaefer said. The call to religious life included taking vows of chastity, poverty, obedience and dedication to the monastic community, he said.
"They helped me move back, helped me go through the process," Brother Schaefer said. "They were kind of on the learning side of this and wanted to know ‘what happens now?’ and the next steps."
Michael Schaefer said he and his wife wanted to help all of their children find happiness in their lives. Assisting with their son’s vocation, they traveled with him to visit several religious communities before he settled on the Benedictines near Elkhorn.
"We wanted him to make the decision," he said. "But we kind of guided in the background. We helped whenever we could."
Kary, 35, who lives and works as part of a secular institute near Elkhorn that supports the Pro Sanctity Movement’s promotion of holiness in daily life, said she also spent several of her formative years in Sioux Falls – in St. Michael Parish with her parents, Steve and Alice, and her sister, Lindsey.
They attended Mass together, prayed before meals and she went to Catholic elementary and high schools. As she grew older, she wanted to be a doctor and have a large family. But now that she lives in community as an apostolic oblate, she has a second family, Kary said.
"I very quickly saw I could be happy here," she said.
Her parents, who helped found and now are active members of St. Katherine Drexel Parish in Sioux Falls, which grew out of St. Michael Parish, said they feel the same way. When their daughter professed her final vows May 17 of chastity, poverty and obedience, and a promise to be fully available to spread the call to holiness, the Karys were there, helping to decorate, prepare the food, and staying on with a small group afterward to reflect on the day.
"We talked about how grateful we were that she found Pro Sanctity. Not only did she gain another family – but so did we," Alice said.
That realization did not come immediately, the Karys said. When their daughter first began talking about a vocation to the religious life, they wondered if she could be happy without a husband and children. And they were concerned when she changed her major in college from pre-medicine to philosophy.
But several things pointed to her having a calling, Alice said. She loved being a youth minister for a time at two parishes in Sioux Falls, and "she was awesome at it." She would have been a terrific mother, which means she has love to share, Alice said.
"There is no doubt that giving her life to Jesus was exactly what she wanted. What more could a parent want?" she said.
Kary said her grandparents on her mother’s side, Ralph and Sylvia Grode, also of Sioux Falls, played a big role in her call to religious life. She remembers them praying the rosary every day, and later learned it was particularly for vocations.
"When I heard that, I knew their prayer drew me to being open to God’s will," she said.

Email ThisBlogThis!Share to TwitterShare to FacebookShare to Pinterest
Labels: Abbey 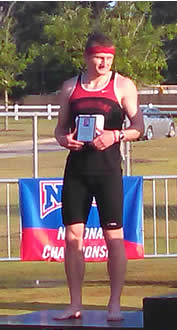 Jacob closed out an amazing Track & Field career with the Benedictine Ravens, placing 6th in the Decathlon at the NAIA National Championships in Gulf Shores, Alabama on May 21-23, 2015.  His 6th place earned him the title of All-American.  Placing 2nd in Javelin and 3rd in the High Jump boosted his final overall score to 6,317.  Other events included in the Decathlon are:  100m run, Long Jump, Shot Put, 400m run, 110m Hurdles, Discuss, Pole Vault, and the 1500m run.  Long Jump and Hurdles were also higher scoring events for Jacob.


Teamwork
Jacob was a team captain for 2 years.  He worked to help the team come together in competition, friendship, and faith by arranging for the team to attend Mass together before meets.  He also served as a Student Leader for FOCUS, leading two bible studies-one for the men’s Cross Country team and one for the men’s Track & Field team.


Jacob spent the summer interning with KPMG for auditing and will start working there in January 2016 after he finishes his last semester at Benedictine College.