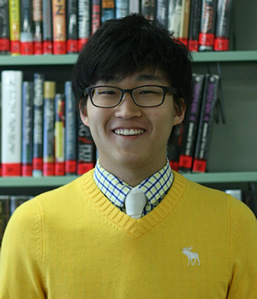 Sophomore Young Joon Park was selected as the 2013 winner for the State of Nebraska in the Letters About Literature national writing contest.  The contest asks students to write a personal letter to an author of a book they have read, reflecting on the impact of that book on their own life or way of thinking.  Young Joon's letter to Arthur Miller about the play "Death of a Salesman" was selected from hundreds of letters across the State of Nebraska as the winner for the high school level of the contest.  In recognition of this honor, Young Joon has been invited to attend the Governor's Proclamation Signing in Lincoln, and his name will be included in the official National Library Week Proclamation for Nebraska.  Young Joon's letter will now go on to the national competition, where it will be read by a panel of judges at the Library of Congress.  More information about the contest and a list of past winners can be found at http://centerforthebook.nebraska.gov/programs/LAL.html.
Update: It was recently announced that Young Joon Park won 3rd place in the "Tribute to the Rescuers Essay Contest" sponsored by the Institute for Holocaust Education. Congratulations Again! http://ihene.org/essay-contest/  - More Photos

The following Mount Michael students also did well in the essay competitions. These students will receive certificates for being finalists (top 5% of essays) or semi-finalists  (top 20% of essays) in this competition.

Finalist:
Cameron Bretson (essay about Sonderkommandos who were German resistance fighters in WWII)

Jacob Bragg (essay about the people of Denmark, who refused to comply with Nazi regulations about the treatment of Jews in Denmark)

Gus deMayo (essay about St. Maximilion Kolbe, who died in place of another prisoner at Auschwitz)

John Gutsmiedl (essay about Rudolph Vrba, who escaped from Auschwitz and supplied the Allies with information about the concentration camps)

Stefano Tarantolo (essay about Rick Rescorla, a security guard who died after helping evacuate others on 9/11)