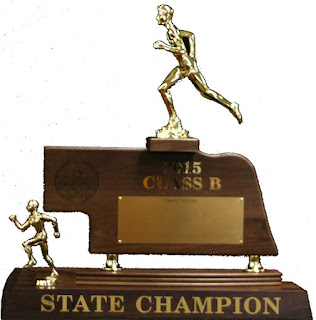 The Mount Michael Knights came away with the another state championship by the narrowest margin possible, one point over surprise Plattsmouth.  This is the 9th Cross Country Championship for the Mount the 6th under coach Gathje.

The Knights were led by Zach Hytrek with a 7th place medal while Nick Carson earned a 10th place medal.  Sam VanHaute & Peyton Hottovy just missed out as individual medalist with 17th and 18th place finishes.  The teams long term goal was accomplished.  State for Nate.  Nate LeFauve would have been a senior on the cross country team. As all familiar with Mount Michael know his life was cut short in a tragic car accident in October 2013. Nate's mother was present and assisted Coach Gathje in presenting the team with their championship medals.