AlumKnight at U.S. Embassy in France 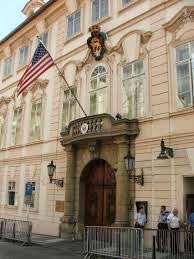 Mount Michael Graduate Tim Fitzgibbons '93 and three other Nebraskans are serving in the U.S. Embassy in Paris France.


Three former residents of the Cornhusker State are working together at the U.S. Embassy in Paris, and one took part in a recent high-level meeting about Ukraine.
They are Kimberly Krhounek, a 1984 graduate of Omaha Westside High and later of the University of Nebraska-Lincoln; Timothy T. Fitzgibbons, a 1993 graduate of Elkhorn Mount Michael and later Dartmouth College; and Bisola Ojikutu, a 1994 graduate of Lincoln High and then the University of Kansas.

Fitzgibbons repeated an embassy quip: “Our California boss said he is getting very suspicious of the Nebraska mafia in our section.”
....... Fitzgibbons, a state speech champion in high school, has served in India, Greece, Italy and the Dominican Republic as well as in Washington, D.C., and at the U.N. in New York.
Tim is the son of Dr. Timothy C. Fitzgibbons and his wife, Therese of Omaha.
See Complete Column