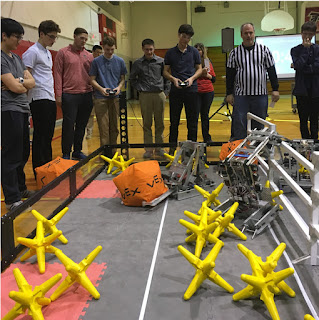 At the DC West Robotics Tournament Mount Michael's Knight Shift, 1970K, continued their winning ways. The team has won first place at all but one of seven area tournaments so far this year, and the one we missed, our team took second place.  They've competed against students from all over the US who come to these events.

There are literally thousands of high school teams (17,000?) in the world and Mount Michael's Knight Shift is in the top 100, and Nick Huetter is somewhere in the top 25 or 30 robot drivers on the planet.