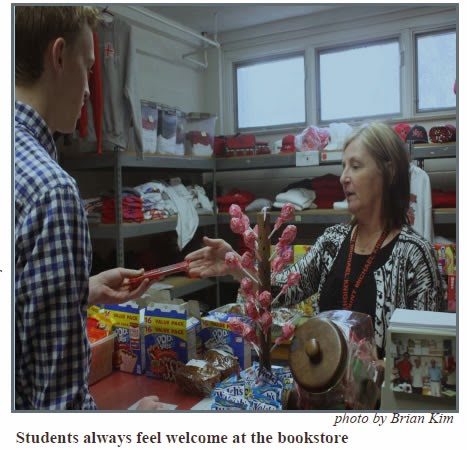 When I first tried to interview Mary Ann Maier, she was actually too busy coordinating the Elkhorn Textbook Loan Program. This one instance is a perfect example of the crazy work ethic and numerous tasks that Maier is in charge of. The number of tasks that she coordinates is in the double digits, and though her official title is Student Advocate/Activities Coordinator, Maier is much more than that.

Maier, the former assistant to Dr. David Peters, first came to Mount Michael in 2011. She was anxious to begin her role from day one and, thankfully, the transition was smooth. “I felt comfortable from the moment I walked on campus,” Maier said.

Since arriving on campus, her role has expanded, making her a well-known face around the Mount. Nearly every student has stopped in the bookstore at one point or another to get a treat. Beyond that, Maier coordinates a majority of the student events like Mom Prom, the picnic and retreats. She also helps with the school directory, book fees and the Advanced Placement tests for juniors and seniors.

Maier isn’t all work though. She has been happily married to her husband Jeff for 34 years, raised three children and recently became a grandmother of two (with two more on the way). Though her work load sometimes drives her crazy, Maier is always able to relax. “I have learned when it starts getting on overload, to pause and pray,” said Maier.

Mount Michael is a brighter place thanks to Maier, and she thinks she has found her niche. “The monks have welcomed me into their home, and for this I am so grateful.”