Will Sleddens | Staff Writer for "The Mount"
This school year, hallways at the Mount seem fuller than ever. Elbows brushing elbows, pushing and shoving through the halls, and squeezing past others have become necessary tactics for making it to class on time. With a record enrollment of 233, Mount Michael staff and students are making changes to accommodate the larger student population. 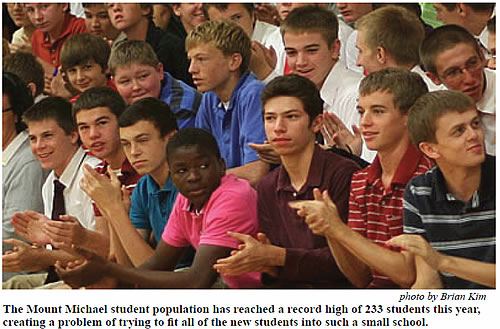 Up by 16 students from last year, new classes, new staff, new schedules, and even a new dorm room have been added to help fit new students. “We've hired another guidance counselor, Mrs. Kunkel, and Mr. Pritchard has become a full-time 7 day dean,” Head of School, Dr. Peters said. “We’re big enough now that we need our own drama teacher, which is another job that Mrs. Kunkel will be doing, and we've expanded our course offerings as a direct result of more students.”

One issue that this population influx has created is lack of space. A large boarding population has resulted in new arrangements to fi t all students into rooms. A new dorm has been added on the four person floor, a room that was previously the senior day student room. Additionally, two sophomores have been moved to a dorm on the senior floor, and a few dorm rooms that normally house two students are being used for three. Zach Hytrek and Brian Kang, the two sophomores living on the senior floor, say they have mixed feelings about their dorm location. “The internet sucks down here. Plus we don’t get to have fun with our classmates on the sophomore floor,” Kang said. Zach Hytrek looked at the upside of having these rooms: “These rooms are way closer to the classrooms, and that’s nice.” He also said that on his first few days on the floor, seniors would always ask why he was on the senior floor. “It happened like 10 times a day!” Mount Michael’s classrooms are fuller this year than in past years, too. The administration has had to work hard to make sure that rooms were available for every course throughout the day. “I’m glad we were able to fi t all of our classes into classrooms,” Peters said. “We thought that we might have to get portables.” Mr. Mackeprang and Mrs. Raabe put a lot into organizing these classes to fi t the school. “Logistics, that’s what the job entails,” Mackeprang said. “Actually, fitting the classes into rooms was the last thing we did. First, we had to work out the schedule. Some people didn't get the classes they wanted, but it’ll never be perfect for everybody. We've managed to make it work well for this year.”

Peters attributes part of the growth to the loss of last year’s small senior class and gaining a new larger freshman class. He also said that, ideally, he would like to see the population top out around 240 (approximately 60 in each class) so students should expect the population to grow.

With this future expansion, however, will come new additions to Mount Michael. Ground was recently broken for a new garage near the monastery, which will allow the old monastery garage to be converted into a new weight room, and the weight room will be converted into classes and teacher offices.

It’s clear that big changes are coming to Mount Michael. With higher student populations comes the need for newer and better facilities around campus. While the elbow banging and shoulder brushing might become slightly irritating, it will be interesting to see the changes being made at the Mount as the number of students continues to increase.