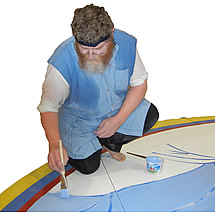 Aside from working as a well-known artist and art teacher at , Fr. Daniel Lenz spent a month of his 2011 summer in working on various artistic projects and learning about Israeli culture. Lenz spent his time well in ; he created multiple remarkable works of art and helped the Arab, Christian, and Muslim community he lived with in the of , .

Lenz's first project was to assist in the completion of a massive 15-foot Pantocrator icon of Jesus, which took two weeks to finish. Pantocrator, which is Greek for "ruler of all", is the image of Jesus holding the Bible in his left hand and giving a blessing with his right hand.

After completing the icon, Lenz was granted permission from the Archbishop of Galilee, Elias Chacour, to begin stone work on a St. Michael the Archangel icon with 'Peace' engraved in English, Arabic, and Hebrew on a slab of limestone from Rama, Israel. This was a very hard type of limestone.

Finally, he created a large banner with the icon of Mary and Jesus on it, which was the last art piece on his list in I'billin. The banner was to be used for an Arab Catholic youth rally called the Hallelujah Festival in July.

Besides completing his line of art projects for the community, Lenz helped the village school security every morning and assisted in traffic control, allowing the students to get to their school safely. He also had the opportunity to participate in and learn about the religious traditions and heritage of the local Arabic people. "I had a number of house blessings and visits with people who had need of a priest. I also learned how to pray in Arabic with the people," said Lenz.

He also made a short trip to the Holy Land, , with a large group of Arabic-speaking Catholics, both Latin and Byzantine. "We all had mass at the Franciscan monastery on the Mount of Zion." He was also able to receive special permission to pray in the where the Last Supper and descent of the Holy Spirit on Pentecost took place. "It was a wonderful experience to pray with the Christians in the at the place of Pentecost," said Lenz.
He was able to celebrate mass at the Basilica of the Annunciation in where the Holy family lived and worked.

Lenz also enjoyed being around and socializing with the people while there. "The people I encountered were very hospitable and loving. In the village I lived in, the Christians, Muslims and Jews got along and really had respect for each other," said Lenz. He thought the food in I'billin was wonderful and he also enjoyed learning about the Holy Land while he stayed in .

Although Lenz's trip to was relatively short, he relished every moment of his stay and is looking forward to other excursions in the future. - Michael Budler '13  More Photos