Feichtinger presented with Athlete of the Year 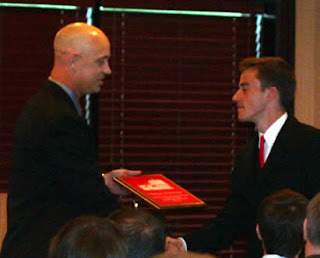 This year’s father and son banquet was held at Indian Creek in Elkhorn. The featured guest speaker was Chicago Cubs owner Pete Ricketts.
At the banquet Mount Michael senior Thomas Feichtinger was presented with the “Athlete of the Year” award. Feichtinger’s notable accomplishments include an all class gold medal in the 3200 at the state tournament in 2011, an individual State Championship last fall in Cross Country. He currently leads all class B runners in the 1600m and 3200m distances in track. He also holds Mount Michael Benedictines school records in those same events. Photos
Acceptance speech by Thomas Feichtinger